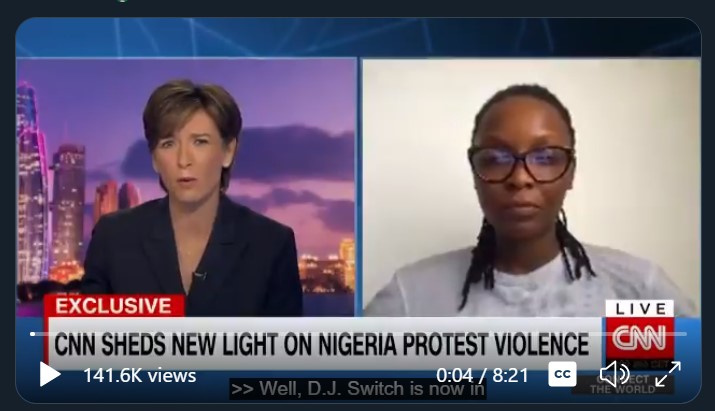 Popular activist and music star, DJ Switch, in an interview with CNN, lamented how the live coverage she did on Tuesday, October 20, 2020, the day armed men in military uniforms, unleashed mayhem, thereby killing peaceful EndSARS protesters, has affected her career.

Recall that in the late hours of that day, DJ Switch streamed the massacre of the protesters.

In the live streaming which attracted wild reactions on a global scale, the Nigerian Army was indicted, as many of the protesters claimed armed men in military uniforms were deployed to unleash the terror.

Following the incident, DJ Switch was however rumoured to have sought asylum outside the country after she claimed that her life was being threatened for live streaming the Lekki onslaught.

Lamenting how covering the incident has set her back, the DJ stated: “My career is gone, all my bookings are gone.”

While expressing delight in what she has done with her platform, DJ Switch stressed that she doesn’t care if the President Muhammadu Buhari-led government arrest her, as she’s tired of running.

“But I am happy that I have used my platform to do this. I don’t want to run forever. I want to go back home, I don’t care if they pick me when I get home,” she added.