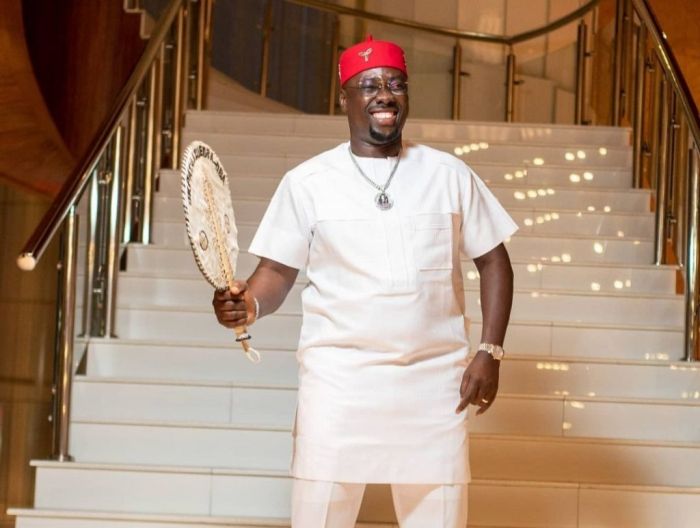 Obi Cubana wasn’t known by a lot of people in the past. In fact some confuse him with Cubana Chief Priest, or wonder if one was working for the other that they both have Cubana in their names.

But all that changed from the day he started the burial of his mother in Anambra State about months ago.

Before the burial, Obi had a quiet life online but soon after the burial, he turned a star on social media and gained over 1.2 million followers on his Instagram page in less than 5 days.

Till date not many can say how he made his money and started life, but he owns a clubbing business in Abuja. The EFCC believes he’s a money laundering agent but he insisted he’s not.

Obi Cubana’s mom died in November 2020 but her burial didn’t hold until July 2021. The rich son wanted to give his mother the biggest burial that will be the talk of the country and that took him over 7 months to plan.

He successfully made his mother’s burial a unique one as the ceremony was held for 7 days. Merriment started early with lots of people, including celebrities showing up to offer their condolences and show support for the young billionaire. Some say he spent heavily for the burial, others say it was his associates who spent the most fund. Whatever the case, it was a mega ceremony.

A Big Party With Big Trends

The ceremony was so big that over 100 cows were slaughtered for the celebration. A trailer-load container of expensive drinks was also used to make sure guests had a blast.

Things that happened at the burial made Obi Cubana trend number 1 & 2 on Google search on the 15th of July with over 100 thousand search each on both positions. Oba his hometown the next day became the second most searched place in Nigeria on the internet.

Obi Cubana loved his mother so much that he wanted to have a lasting memory of her hanging around his heart. In the quest for this, the young man spent over 55 million Naira on a diamond necklace where he encrusted his mom’s face on the pendant with real diamonds as shown in the photo below.

Troubles That Came After The Burial

Few months later, Obi Cubana was arrested by the EFCC over allegations of money laundering and tax evasion. He slept in EFCC cell for days before he was later released.

Shortly after, a tragedy occurred at his night club when a lady mysteriously lost her life on the premises.

Obi Cubana is now known by all and sundry in Nigeria and beyond. He is said to be trying to live quietly as before but things are not the same anymore for his brand.