Naira has fallen amid devaluation concerns. check out new Dollar to Naira exchange rate below.

Afrobadootv reports that the Naira depreciated at the official and parallel markets amid growing concerns that oil revenue fluctuation and global monetary tightening would lead to further devaluation of the currency.

Analysts at Cowry Asset Management, which actively trades in financial instruments, said they expected the Naira to depreciate further in the new week as investors react to changing global dynamics

Analysts at Cordros capital noted that although the CBN might have enough supply to support the foreign exchange market over the short term, global and domestic challenges may force the apex bank to adjust the Naira exchange rate further.

According to analysts, foreign inflows, which have been disrupted by lack of global investors’ confidence in Naira rate management, are paramount for sustained forex liquidity over the medium term as accretion to the national reserves will be weak given that crude oil production levels remain quite low. Thus, foreign portfolio investments (FPIs) which have historically supported supply levels in the I & E Window will be needed to sustain forex liquidity levels. About 53.8 per cent of forex inflows to the I & E Window in 2019 were from FPIs.

“Hence, we think further adjustments in the Naira/Dollar peg closer to its fair value and flexibility in the exchange rate would be significant in attracting foreign inflows back to the market,” Cordros capital stated in a weekend note.

The Naira depreciation across the markets came on the heels of all by the International Monetary Fund (IMF) that Nigeria and other emerging economies should allow their currencies to depreciate to avoid a disorderly condition that may arise in their forex markets as a result of an imminent policy tightening by the Federal Reserve Bank of United States.

Economies, especially Nigeria as it navigates through the pre-election year, the above action plans as proposed by IMF posed a difficult choice for the oil-rich African country as it trades off supporting a relatively weak domestic economy with safeguarding price and foreign exchange stability,” Cowry Asset stated.

Afrobadootv understands that analysts, however, called on the government to also take responsibility to restore investors’ confidence given the nature of the challenges facing the country which may be aggravated by any rate hike by the apex bank. Elon Musk has sold nearly $7 billion worth of Tesla shares, according to legal filings published on Tuesday, amid a high-stakes legal battle with Twitter over a $44 billion buyout deal.

The Tesla boss sold some 7.9 million shares between August 5 and 9, according to filings published on the Securities and Exchange Commission’s website.

“In the (hopefully unlikely) event that Twitter forces this deal to close and some equity partners don’t come through, it is important to avoid an emergency sale of Tesla stock,” Musk, the world’s richest man wrote on Twitter late Tuesday.

Twitter is locked in a legal battle with the mercurial Tesla boss over his effort to walk away from the April agreement to buy the company, and a judge has ordered that a trial will begin in October.

Musk has filed a countersuit, accusing Twitter of fraud and alleging the social media platform misled him about key aspects of its business before he agreed to a $44 billion buyout.

The move comes after Musk sold around $8.5 billion worth of shares in the electric carmaker in April as he was preparing to finance the Twitter deal. He tweeted at the time: “No further TSLA sales planned after today.” 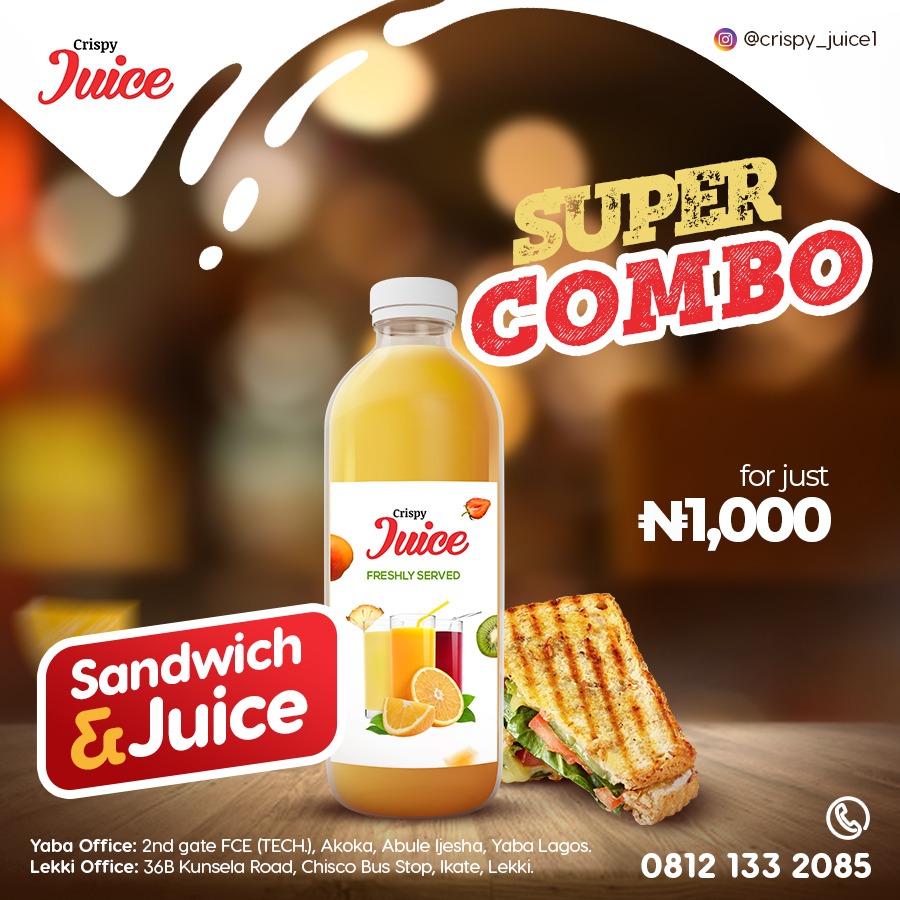 Crispy juice has extended their tentacles in the quest of satisfying their esteemed customers.

This package titled super combo comes with sandwich and juice and it’s sold for just N1,000.

According to them, this super combo is packaged to give unbeatable nutritious greatness.

This idea was borne out of consistent requests from their esteemed customers.

Interestingly, this package can be delivered everywhere in Lagos ranging from the island to the mainland.