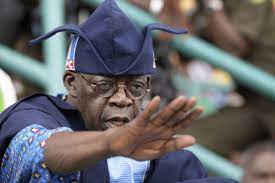 Sequel to the viral news that the National Leader of the All Progressives Congress, Asiwaju Bola Tinubu declared that he was ready to fight dirty for the stool of presidency, the former governor has debunked such news and described it as absolute falsehood.

The APC Leader said his speech at the Palace of the Olubadan of Ibadanland designate, while referring to the attacks against his person is a metaphor about wrestling with a pig which will necessitate getting dirty.

He added that the unwarranted attacks against his person are what he sees as sacrifices he has to make for the development of Nigeria.

The caption and report which have since followed the report according to him are inaccurate and erroneous.

These commentaries and remarks are unfortunate because they are groundless, misinformed and misdirected hence the need to make clarification on an innocent metaphorical expression which has been misrepresented.

It bears restating that at no time during the visit and in his speech did Asiwaju indicate that he would fight dirty for his presidential ambition. His words were carefully chosen.

For clarity and avoidance of doubts, this is what the APC leader told Olubadan-Designate High Chief Balogun: “Kabiyesi, all I have come for is to beg you to continue to pray for me, the entire Yoruba race and the country. Now I am out. Out for what, Kabiyesi? I am out to become the President of the Federal Republic of Nigeria. There is a wise saying that if you want to wrestle with the pig, be ready to get dirty and deal with the poo-poo. I am ready to get dirty. No intimidation, no blackmail, no sort of insult will get me angry to the extent that I will say no more, I don’t want again…”

This statement is comprehensible and clear enough. Our appeal to the media is that as the 2023 election approaches, and indeed at all times, they should not allow their mediums and platforms to be deployed in the desperate smear campaigns and campaigns of calumny by politicians. They owe themselves and our society to report accurately and objectively without fear or favour. The duty of the media as the Fourth Estate of the Realm is a sacred one which must be guided jealously.

2023 Presidency Ganduje backs Tinubu, says entire North is behind him

My generation should step down – Obasanjo