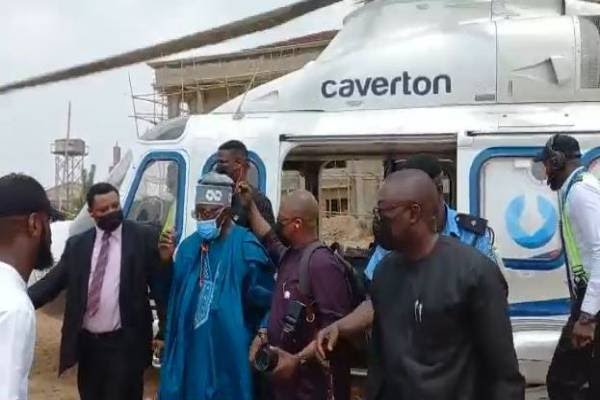 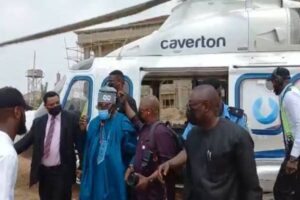 Reports that the National leader of the All Progressives Congress and 2023 Presidential aspirant, Asiwaju Bola Ahmed Tinubu has arrived Ile-Ife and met with the Ooni Of Ife, Oba Adeyeye Ogunwunsi in his palace of Oodua.

He was received by the Governor of Osun State, Gboyega Oyetola and his wife, Kafayat.

The is part of his visits to traditional rulers in Southwest over his 2023 presidential ambition.

Recall that Tinubu had last week Saturday visited Alake of Egbaland, Oba Adedotun Gbadebo and Awujale of Ijebuland, Oba Sokiru Adetona in continuation of a nationwide consultation towards actualisation of his ambition to lead the country in 2023.

Tinubu who arrived at the palace of Oba Gbadebo, at 4:30p.m. told the paramount ruler and his chiefs that he elected to first visit President Muhammadu Buhari and intimate him of his presidential ambition as a necessary decision and in order not to step on toes.

He disclosed that the President afterwards advised him to also let the world – Nigerians know about his 2023 presidential aspiration.

The former Lagos State governor said he was at the palace to seek the support and blessings of the monarch towards his 2023 presidential ambition.

Tinubu had earlier stopped over in Ijebu – Ode, the royal home of Awujale and headquarters of Ijebu – Ode Local Government Area where he informed Oba Sikiru Adetona of his political ambition and sought the support as well as blessings of the revered monarch.

While in Ijebu Ode, he was welcomed to the palace of Awujale of Ijebuland, Oba Adetona, by a crowd of enthusiastic supporters.

At the Alake’s palace, Abeokuta, Tinubu said it was the people who asked him to make himself available for the number one office in Nigeria come 2023, recalling that he had contested for a senatorial seat and governorship office in Lagos and won in all the instances.

“I contested the Senate at the youngest age ever, I won. I contested for the governorship, I won twice. Before that, I was part of the struggle for the return of democracy in Nigeria. We supported several persons for several positions, the Governor, Senate, House of Representatives, House of Assembly, chairmen of councils, councillors and helped people in several political positions in the country.

“This time, it is the people that asked me to contest for the presidency of Nigeria. When they started, I was not there and they had moved to several places.

“I have told the President, Muhammadu Buhari, that I want to step into his shoes and not his toes. When I told him, he said I should tell the world. That is what I am doing now. I need your prayers for the project.

“I am here to seek the support of Kabiyesi and the people of Egbaland not only to be the candidate of the APC but to win the presidential election and govern the country.”