THE Council of State led by the President, Major General Muhammadu Buhari (retd.), has approved the pardon of 159 convicts including a former Governor of Plateau State, Senator Joshua Dariye; and ex-Governor Jolly Nyame of Taraba State, who were both imprisoned for stealing N1.16bn and N1.6bn respectively.

Confirming Dariye’s pardon, the Commissioner for Information, Dan Manjang, told The PUNCH that the ex-governor had been given a second chance.

He added “Every Plateau man is happy about it and we give kudos to the President for honouring us in this manner .We want to also thank whoever that has a hand in making it happen because everybody makes mistakes and you can make errors while in governance.

“As of today, he (Dariye ) has been given a reprieve as if nothing has happened and that is the spirit we have to imbibe as a people that when we make mistakes, we have to forgive because nobody is above error “

The Director of Press and Public Affairs, Government House, Dr Macham Makut, also confirmed that Governor Simon Lalong was at the council of State meeting where Dariye was granted state pardon.

The Speaker of the Taraba State House of Assembly, Prof. Joseph Kunini, also hailed Nyame’s pardon in a statement on Thursday while The PUNCH reported that there was jubilation in some parts of the state following the news.

The Spokesman for Dariye, Mr. Christopher John, confirmed the pardon of both Dariye and Nyame to one of our correspondents.

John said the pardon of the ex-governors had nothing to do with the fact that they were members of the All Progressives Congress.

He claimed that both men were unfairly convicted, adding that their pardon was a form of vindication.

Dariye’s aide added, “We are so excited about this. We’ve been expecting for a long time and fortunately, it has come at this time. We thank God and the government for granting him this pardon. The Nigerian system has made many court judgments unreliable. You can be roped into things you know nothing about.

“I believe that it is the will of God for him to be released. I don’t trust the Nigerian court system. Jolly Nyame was also released and we thank God. It has nothing to do with them being in the APC. It was even the PDP that charged them to court. The APC was not in power when this thing started. We know the genesis

Dariye and Nyame were convicted by Justice Adebukola Banjoko of the Federal Capital Territory High Court in 2018. Dariye, who was governor from 1999 to 2007, was jailed for laundering public funds to the tune of N1.162bn and was sentenced to 14 years in prison by Justice Banjoko who has since been elevated to the Court of Appeal.

Dariye’s prison term was later reduced to 10 years by the Court of Appeal in Abuja while his conviction was affirmed by the Supreme Court.

For Rev Nyame, who was governor of Taraba State from 1999 to 2007, he was sentenced to 12 years in prison for stealing N1.6bn from the state’s treasury, a judgment which was also upheld by the Supreme Court.

Addressing journalists after the Council of State meeting in Abuja on Thursday, the Attorney General of the Federation and Minister of Justice, Abubakar Malami, said the council approved 159 out of 162 applications presented for consideration for the prerogative of mercy for convicts and inmates in correctional facilities nationwide.

According to Malami, the council rejected a proposal to grant pardon to one of the prisoners sentenced to 120 years for theft of over N25bn. The pardon, he said, was sought on health grounds.

Though the AGF kept mum over the identity of the prisoner in question, a top presidency source identified a former Managing Director of Platinum Habib Bank, Francis Atuche, as one of the people not fortunate to be pardoned.

The Council of State is an organ of the Federal Government responsible for advising the executive on policy matters.

Members include the President, past Presidents, the Vice-President, Senate President, Speaker of the House of Representatives and both serving and past Chief Justices of Nigeria.

Others include the Attorney General of the Federation, all governors and the Minister of Federal Capital Territory.

In attendance were Vice President Yemi Osinbajo, Secretary to the Government of the Federation, Boss Mustapha, National Security Adviser, Major General Babagana Monguno (retd.) and Chief of Staff to the President, Prof. Ibarahim Gambari and governors. According to NBC News, a Wednesday release by the Hawaii Police Department stated that a warrant was issued for the arrest of 26-year-old Clenney on allegations of second-degree murder with a deadly weapon.

Clenney’s attorney, Frank Prieto, revealed that she was at a rehab facility in Hawaii for substance abuse and post-traumatic stress disorder when she was picked up by police.

Prieto also stated that Clenney arrest was shocking because of “the clear evidence of self-defense in this matter.”

As earlier reported by The PUNCH in April, policemen responded to calls at the couple’s Miami apartment where Tobechukwu was found bleeding.

The family of Obumseli had been calling for justice after Courtney was not charged under the Baker Act, over considerations for her mental health.

In Florida, officers can commit a person to a mental health treatment centre for up to 72 hours by using the state’s Baker Act.

Clenney is expected to make a first appearance in local district court on Thursday, after which she will eventually be extradited to Florida. 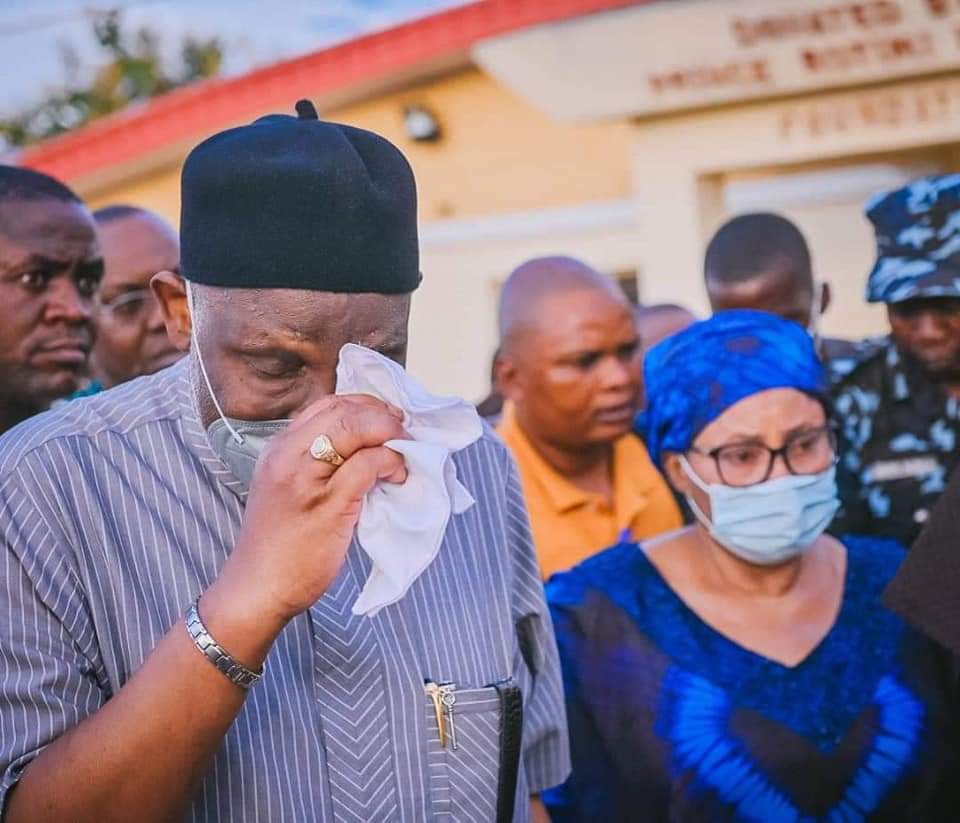 Akeredolu confirmed the arrest shortly after the Chief of Defence Staff, Gen. Lucky Irabor, announced the arrest of two of the masterminds of the attack in Abuja.

Akeredolu was speaking while receiving the chairman of the state chapter of the Nigeria Union of Journalists, Ondo State, Prince Leke Adegbite, and his executive members.

The governor also disclosed that the person who allegedly housed the suspected terrorists before carrying out that the attack had been arrested.

He said , ”Now that the military has announced it, I can tell you that five of them have been arrested now. They are still on the trail of the rest. The home where they lodged in Owo and the person who lodged them before the attack, have also been arrested.

“We did not spare a moment. I am happy that the Chief of Defence Staff has announced it.

“We have known for a while but we needed not to come out with it because more works are still ongoing. I can confirm that this arrest has been made. And they are still on the trail of some of them.”

The governor also confirmed that some Ebira indigenes are now involved in the some act of kidnapping recently in the state.

“I want to use this medium to urge our brothers (Ebira) to concentrate on their farming trade. It will be unfortunate to know that the Ebiras in our midst are now involved in kidnapping.

“We are appealing to them not to copy bad thing. The traders selling by the road side should not become informants. We are not fighting them; we have seen their numbers, they supported and voted for us during elections. I will call their leaders and talk to them.

“Our brothers who were kidnapped on their way to Ikare; talk to them, they were taken to Ebira farmsteads.For me, we have lived together for too long for this to happen. I am ready to make any effort to ensure that the conviality that we have enjoyed continues.

“But we are begging their leaders to urge them not to copy bad thing. They are in our midst, we are surrounded by them. The issue of security is key and it’s dynamic,” he appealed.

Earlier, the Chairman of the NUJ, Adegbite appreciated the governor for his support for the management of Ondo State Radio-vision Corporation and Owena Press PLC, adding that the upgrades of facilities in the two state-owned media outfits are commendable.

He also thanked the governor for the approval of the weigh-in allowance for journalists and information officers working in the state and local government service.