﻿ Alaafin of Oyo daughter, Princess Folashade reveals how his wives truly relate in the palace - AfrobadooTV 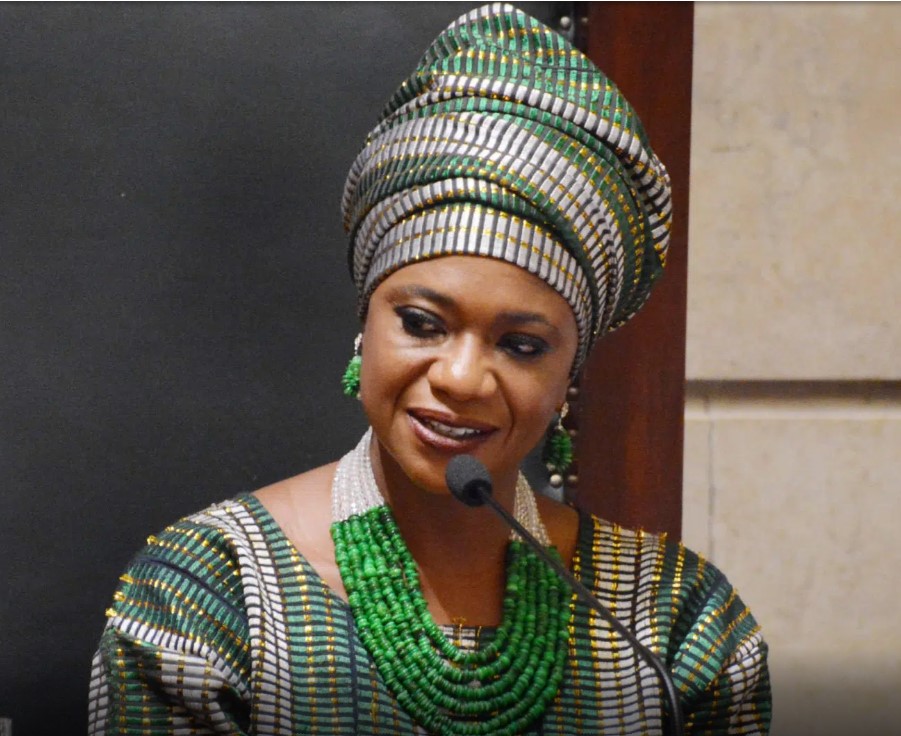 As the saying goes, “with great power comes great responsibility,” this rings true for the first Alaafin of Oyo daughter, Princess Folashade Adeyemi.

Alaafin of Oyo daughter, Folashade has revealed that being the daughter of the Alaafin is no walk in the park and being the first daughter makes it even more so.

While appearing as a guest of honor at the recent installation anniversary of Iba GaniAbiodun Ige Adams, as the 15th Aare Onakakanfo of Yoruba Land, the princess spoke with correspondents from City People, throwing some light into her life as a princess.

She opened up about the many responsibilities that come with being who she is, combined with her career as a Cultural Consultant and Ambassador of the Yoruba race.

When asked what it is like being the first Alaafin of Oyo daughter, she said, “It comes with great responsibilities because firstly it is like I don’t have a personal life. Although I have an older brother who is the Aremo and as the Yorubas used to say that Egbon lo leru, meaning the older carries the burden but you know we women hold it together.

“I have to be around anytime we have any activity and you know Baba can’t be everywhere at every time, so I have to represent him.

“Sometimes when I even go on my own, people will say oh, Baba is here and that comes with a great responsibility. I am also trying to mix the modern with the old and blend it with culture. It is a tough and demanding task.“

Speaking on her childhood with the Alaafin, she said, “I was born before he became a king so we had a lot of him. He gave us a whole lot of attention. Alaafin cooks for us and he takes us out of the country with him.

“Baba is very principled and that is why I call him a soldier. He did not spoil us at all. When we ask for money, we have to give account of why we need the money. Baba believes that because he is the Alaafin, we have to be self-sufficient and he taught us to be independent. He taught us to live our lives like we don’t have anyone.

“I so much enjoy his fatherly love. Even though he is busy now, he still gives out time to advise us. Even now that he has younger wives, he still wakes up at night to check on his wives and children. He makes sure his kids are bathed very well. He is an extremely neat person that can’t tolerate any form of dirt. I saw him washing his bath tub at a time because he felt that they did not wash it enough. Alaafin does not eat outside. He told us that royalty does not eat anyhow. The silver spoon was there but it was not available all the time.

“He taught us to survive by ourselves because he believes that one day he would no longer be around us and we will need to survive alone. He has built that name and legacy, so it is up to us to build on what he has built.”

She also talked about the wives of the Alaafin.

We have heard so much about your Dad, tell us briefly about your mum?

My mum is my father’s first Wife and first love I guess. Her name is Oloori Nilola Abibat a.k.a Iya Dodo. She has 5 children and she is still with Alaafin. She just turned 80 last year December.

How old is their love story?

Their love story is close to 60 years. They met through my late Aunty. My fathers sister then attends the same school with my mother and she brought her home and that was how my father kept chasing her.

Alaafin is blessed with a lot children and wives. What is the relationship between you and Baba young wives?

I take my wives out and we have nice times. Although we are not perfect people but we love each other. There are challenges here and there but we get along very well and the palace is full of love. There is respect. People used to say that what I am doing never happens in Polygamous family but we thank God for the strong cord of love.