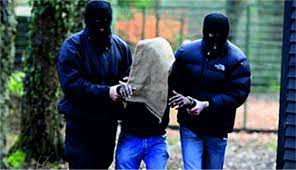 Officers of the Nigeria Police Force, Federal Capital Territory Command, in collaboration with Destiny Hunters, on Tuesday, rescued four victims from the den of kidnappers and dislodged the bandits from their hideout in Dadu Hills, Kuje area of Abuja.

The police confirmed this in a statement made available to The PUNCH.

The statement read in part, “Following the receipt of actionable intelligence about the movement of suspected bandits holding some persons hostage, the FCT police command in a concerted effort with the Destiny Hunters, stormed Dadu hills via Chukwuku in Kuje Area Council of the territory, dislodged the bandits from their hideouts while destroying the hideout, and successfully rescued four victims”.

According to the command’s Public Relations Officer, Josephine Adeh, the operation commenced at about 6:00 am on Tuesday, May 31, 2022.

“The operation commenced at about 06:00 hours on Tuesday, May 31, 2022, and we recorded the rescue of one Mustahudeen Vaa, and Adamu Isa all males who were reportedly kidnapped between the 23rd and 25th of May 2022 at kiyi and one Abdulsalam Uzugiz who was kidnapped at Angwan Gade extension of Kuje Area Council of the Territory.

“Unfortunately, the criminal elements upon sighting the gallant advancement of the team engaged them in a gun duel where a member of the Destiny Hunters paid the ultimate price.

“However, the miscreants retreated with various degrees of gunshot injuries owing to the superior firepower of the team.

The police also stated that the victims had been reunited with their families after getting medical attention.

“Victims were taken to the hospital for medical examination and subsequently reunited with their families.”

The FCT Commissioner of Police, Babaji Sunday, while extending condolences to the family of the deceased reassured residents of the command’s commitment to ridding the territory of crime and criminality.

He said, “Members of the public are, therefore, urged to remain vigilant, and strengthen their partnership with the police as touching the rendition of prompt and actionable intelligence reporting any suspicious or abnormal occurrence through our emergency lines.”